manufacturing experts, business leaders, and academics assembled in Wakefield in a unified ‘show of force’ for the manufacturing industry

In light of runaway inflation and a struggling UK economy, the panel said that manufacturing could be “the key” to rebalancing investment and industry across the country, driving higher levels of GDP growth, creating more well-paying jobs, and increasing British exports abroad.

The panel discussion was held at Sewtec Automation, who partnered with Coventry-based research and technology organisation Manufacturing Technology Centre (MTC) and cross-party think tank The Institute for Prosperity (JMI). JMI seeks to revive communities, such as Wakefield, that have suffered from a steep decline in manufacturing over recent decades.

The panel was moderated by former minister and former Labour MP for Don Valley Caroline Flint, who is also the Chair of The Institute for Prosperity.

We all agreed that manufacturing could be the key to helping the UK overcome its current pressing economic challenges. It can help unlock many of the solutions to the problems that we face as a country. We need to make sure that the right policies are put in place to not only protect manufacturers – but to make it pay to site and ‘reshore’ new manufacturing facilities here too. We all agreed that investment in innovation and a confident workforce where young people, especially girls, see a future for themselves working in manufacturing and engineering is especially important. We need to find solutions so that people can see a career in manufacturing from an early age and the jobs and opportunities manufacturing creates in the places they live. Leading manufacturers, like Sewtec, play an important role in the local community, providing high skilled jobs to hundreds of local people, investment in emerging technology, and exporting British made goods.
Caroline Flint It is clear our manufacturing industry is in a dire state. More than 16% of people worked in manufacturing around 20 years ago, but today that number is closer to 8%. For far too long has the Government run the country in favour of bankers in London rather than makers in Wakefield. It is time for root-and-branch change, starting at the heart of how our economy is run. Investment into manufacturing generally leads to more GDP growth than other services sectors, so it’s vital that it’s not forgotten. To rebalance the UK economy, we need to increase manufacturing to 15% of GDP.
John Mills

Mills stressed that to be taken seriously on the global manufacturing stage, drastic changes would have to be made. One solution to revive the industry was a competitive exchange rate policy. Lowering the value of the Pound, according to Mills, would help reindustrialise the country as British-made goods would be made cheaper and therefore more competitive overseas.

Dr. Yan Wang, Principal Lecturer in manufacturing and engineering at the University of Brighton, highlighted the potential presented to the UK by becoming a leader in remanufacturing, which is the process of rebuilding ‘as-good-as-new’ products using a combination of reused, repaired, and new parts.

Mike Wilson, Chief Automation Officer at MTC, highlighted the huge potential that automation and robotics presented to the UK industry. He said that more companies were now investigating options to reshore their manufacturing operations because of the higher costs of global shipping – and that adopting automation at all levels of manufacturing in the UK would enable us to continue competing effectively as a manufacturing powerhouse globally.

However, Wilson also warned about the risk of ‘reshoring’ becoming ‘near shoring’, with companies seeking to bring their manufacturing operations closer to the UK from Asia, but still opting for other countries in Europe rather than the UK. He stressed the importance of automation as a ‘competitive advantage’ for UK businesses – and called on the government to make the UK one of the most attractive places to set-up manufacturing plants. 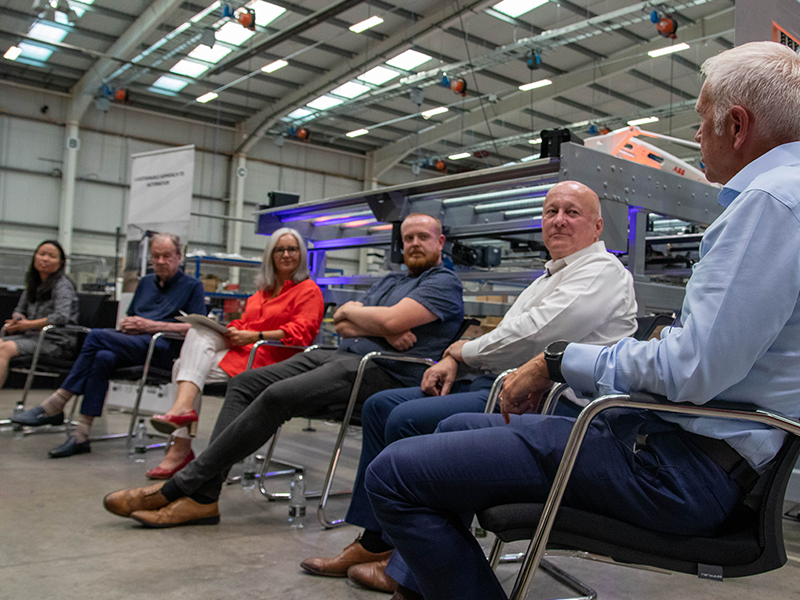 Mark Cook, Chairman of Sewtec, said that manufacturers, Government, and the wider industry needed to do more to transform perceptions of manufacturing as being a ‘dirty and unsafe’ industry to that of being an innovative, high-tech, and cutting-edge sector, like Sewtec’s own leading facility. Having worked closely with schools, Cook highlighted that when young people visited the Sewtec facility they were impressed and excited by the prospect of working in such a high-tech sector – but that they often came in with misconceptions and false impressions about the sector.

See Mike Wilson, Chief Automation Officer at the MTC, comments in the video below

Founded in 2020, Institute for Prosperity brings policymakers together to affect change and find new solutions to Britain’s economic problems. supported by an expert Advisory Board, it firmly believes that Britain must raise its sights and reject 1% economic growth per year, which has become the new norm. By investing in economic growth and getting our economy to grow at over 3% per year, we will increase levels of prosperity across the whole nation and ensure no one is left behind. To find out more, visit: https://instituteforprosperity.org.uk/